A paradise for the senses

Traditionally a hub of meetings and exchanges, markets have always been the place for people of towns and cities to buy their basic necessities. Nowadays, despite the growth of other businesses, many of these markets have become must-see architectural treasures, restored for enjoyment which goes beyond simply buying the quality products which they offer. In addition to being beautiful to look at, to touch, to smell, to taste and to listen to the hustle and bustle; the market still embodies the traditonal community feel and connects directly with the essence of the city.

Originally a street market on Las Ramblas in Barcelona, Boqueria Market is now a member of the european Emporion network of excellent food markets and has won many awards including one for the “best market in the world” at the International Market Conference held in Washington DC in 2005.

The 300 stalls that make up the market, which has already become one of the main tourist attractions of Barcelona and the Raval neighbourhood, offer top quality products and welcome its visitors into a commercial environment in which the communication and interpersonal relationship between the buyer and seller are still present today. 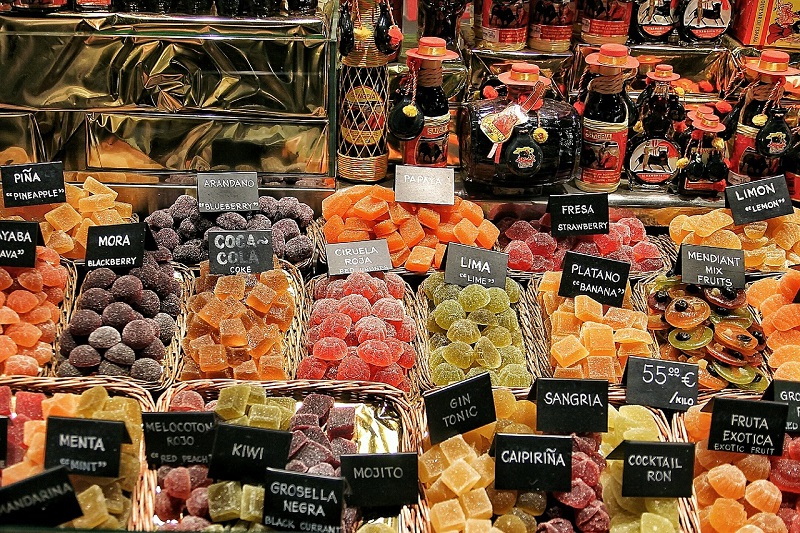 Situated in Valencia’s old town, Central Market has become, together with La Lonja de la Seda (silk market) and La Iglesia de los Santos Juanes (Church of Santos Juanes), one of the most symbolic and most visited buildings of the city. Valencia’s Central Market originally started out as a street market. This was the case up until 1910 when the architects Alejandro Soler March and Francisco Guàrdia Vial developed a new project influenced by the Art Nouveau movement which was then finalised in 1928 by Enrique Viedma and Ángel Romaní.

In the early 20th century the technical and commercial advancements of the time were introduced, but the agricultural potential of the Valencian land was always respected. A process which is reflected in the internal decoration and modern structure which the market incorporates: iron, crystal and ceramic domes crowned with a parrot weather-vane and fish weather-vane which are visible at the top of the landscape of Turia. 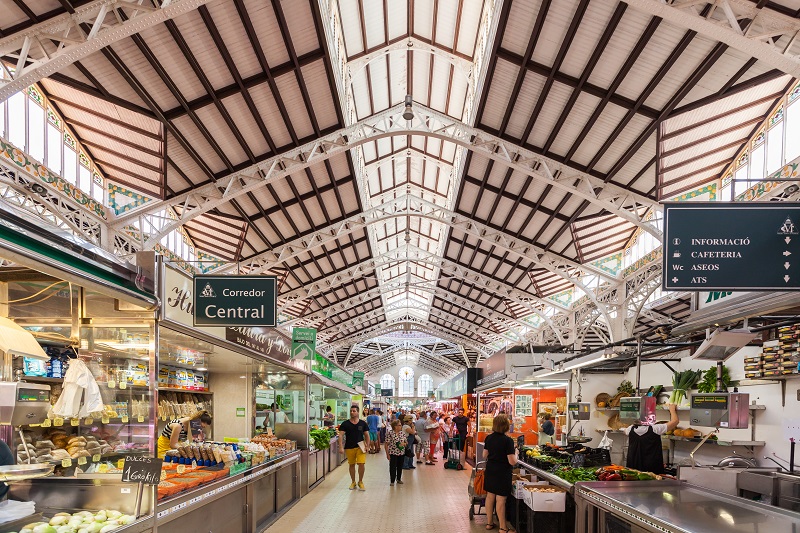 There are circa 400 independent traders which are split across the two sections of the building. It is the biggest centre in Europe devoted to the speciality of fresh products and it was the first market in the world to rise to the challenge of digitilising sales and offering a home delivery service back in 1996.

Valencia’s Central Market was also the location for the luxury party organised by Italian brand Prada in 2007 which was attended by celebrities from the worlds of film and fashion. Demi Moore was among those who attended.

Meat, cheese, fish, fruit, vegetables, cosmetics, confectionary, wines, yoghurt… all the top quality products that you could possibly wish to buy, you can find in Madrid’s San Miguel Market. In addition to this you have the facility to take a break and sit down to eat at one of the many tables inside the market whilst taking in the incredible atmosphere of San Miguel Square, right in the centre of Madrid.

The building, completed in 1916, was developed under the leadership of Alfonso Dubé y Díez and these days is considered as a Top Cultural Interest in the Monument category.

The influence of catalan modernists is evident in this building which was opened on Christmas Eve in 1916 and designed by the architect Francisco Mora.

The Colón Market, situated in one of the busiest and most commerical areas of Valencia, is more than just a place for buying produce, it also integrates cafés where you can grab a bite to eat.

Additionally, every sunday you can enjoy a musical performance lead by one of the many bands of Valencia or it’s surrounding areas. 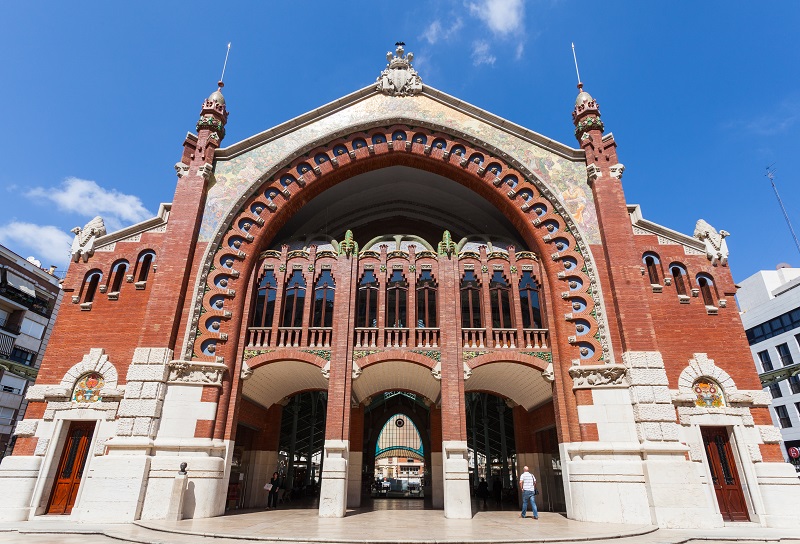 Considered as Historical Heritage of Humanity, it was created as a solution to the need for a market in the andalucian capital. Eiffel was supposedly in charge of it’s design in 1861, although the work was not completed until 1883.

With a total of 1200 square metres spread across two floors and 20 well-reputed hospitality stalls, this market has become a multi-purpose area for gastronomic, leisure and cultural activity.

A National Monument since 1978 and Top Cultural Interest since 1982, Central Market Lanuza was designed by the architect Félix Navarro with the help of wood carver Jaime Lluch.

Located next to the Roman walls,  the Central Market is right in the historic centre of the Araganese capital and has around 200 stalls selling cheese, cod, meat, and dietary products, among other things which connect us with the flavours and scents of Zaragoza.

The Mercado del Puerto de la Luz is situated in a modernist building which was built from wrought iron in 1891 and remodelled in 1994, making it the clearest example of iron architecture in Gran Canaria and in line with the island’s recent history and socio-economic development. It’s decorative features have been classified by many writers as Art Nouveau; such as the emphasis on glass in the decoration.

An unusual feature of the market has been the willingness to set up retail shops around the exterior of the facility. And although the early history of this building was about meeting the need to provide for the inhabitants of the area, nowadays it remains an important place for buying andselling and an interesting site to visit.

Markets are are not only interesting sites to look at, but also to experience. You breathe in an atmosphere which connects the history of the city with the present moment and which continues to keep up face-to-face exchanges which have over decades created a community. You won’t regret a visit, so make sure to include a trip in your itinerary!