Lake Garda is the largest of the Italian lakes and a tourist destination visited by locals and travelers. There are several villages located on the “shore” of the lake, most of them very picturesque and worth a visit. Similarly, there are many activities that you can do in the area, so we leave you also everything to do in Lake Garda and a list of places to stay while there. After this short introduction and after you have discovered a little better this wonderful corner, it’s time to make way for the guide that we have prepared for you with the most instagrammable places on the lake. So, discover the Lake Garda must-see palces and find out where to get the best pictures.

Lake Garda must-see: places that will triumph on your Instagram

The villa and the gardens of Isola di Garda

A boat trip to the Isle of Garda will be like traveling in time. It’s the largest of the entire lake and has been inhabited since Roman times. You can find there a beautiful Venetian Gothic style villa reminiscent of the Doge’s Palace in Venice. It’s inhabited by the Counts of Cavazza, but since 2002 is open to the public and you can visit its beautiful gardens and parks. It’s only possible to get there by boat from some points on the shore, such as Sirmione, and on specific dates defined by the inhabitants of the island.

The tropical beach of Jamaica in Sirmione

One of Lake Garda must-see in Sirmione, near the Caves of Catulo (ruins of an ancient Roman villa) where the beach of Jamaica is nestled. It’s a paradisiacal place with a tropical aspect and turquoise waters. The contrast between the white ruins and the water creates a beautiful picture. A path takes you there from the center of the town.

You will see areas of flat rock that emerge from the sea which are at the height of the surface. They are ideal for lying down or walking on them. Of course, you should bear in mind that the surface is slippery, so put on appropriate shoes. In this little gem, you will find a bar to have a drink or snack. If something has to be on our list of things to see in Lake Garda, this one would be on the top. 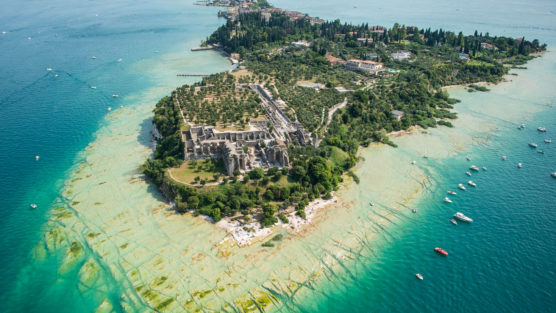 The amazing views from the Rocca di Manerba

Manerba del Garda is one of the must-see villages along Lake Garda. The municipality itself is beautiful, but you can find the jewel of the crown in the Rocca. It’s a natural reserve on the shore of the lake where some ruins of a medieval tower stand out from which you have incredible views.

The small and pretty village of Borghetto

Borghetto sul Mincio (so called because it’s located next to the Mincio River) is literally considered one of the most beautiful villages in Italy: I Borghi più belli d’Italia. It’s one of those places that seem taken from a postcard photo. It has a few houses (all of them made from stone) and only 160 inhabitants; but on the other hand, it has many water mills and ruins of medieval constructions that appear among the trees on the hill. It’s so small that it can be seen in half a day, so don’t hesitate to visit and photograph it.

The Scaligero Castle, in the village of Malcesine

Malcesine is a medieval village in the north direction of the lake. It’s only 60 kilometers away from Verona and this, added to the many charms it has, makes it a very visited place by tourists. Some places stand out, such as the old town (with many shops and restaurants), the port (with little houses that border it), the Palazzo dei Capitani and the before-mentioned Castello Scaligero.

The Castle hosts a museum and from it, you have lovely views of the lake. It’s open from March to November and the entrance fee is around 6 euros. 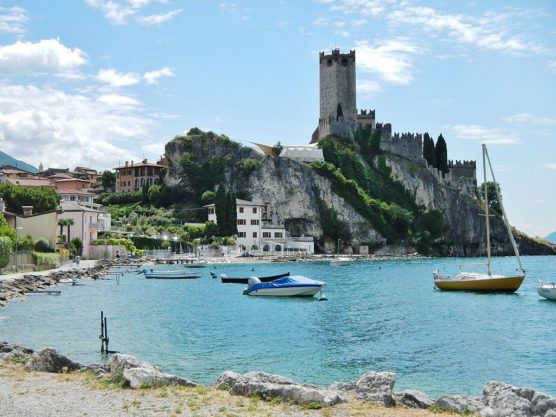 The cable car that goes from Malcesine to Monte Baldo

You can hallucinate with the different shades of blue of Lake Garda seen from above. You will also see alpine peaks, mountains and green paths. “You will fly” to 1,800 meters of height in rotating cabins that will allow a view of all the surrounding landscape.

You start from the town of Malcesine on the shore of the lake. In less than an hour, you will reach Monte Baldo, which is famous for its rich flora (people even call it the Garden of Europe). The experience is amazing and costs about 20 euros per person depending on the season.

These are our Lake Garda must-see places. It’s not because there aren’t any other places left but if we mention them all, we would have an endless list.

Share your favorite spots if you have visited this Italian lake ?.