Choose one of these beautiful places with flowers to fill your Instagram with colourful and pretty photos. In addition, this is another reason to pick up this destination for your next trip. If you like flowers, towns surrounded by nature, urban gardens and green corners, the following selection is made just for you.

? Beautiful places with flowers to take the best photos

The magic tunnel of the cherry trees in Bonn (Germany)

Heerstraße street gets transformed when spring arrives and the cherry trees start blooming. For two weeks, a pink tunnel of sakura (the name in Japanese) occupies the street. It’s often called the Avenue of the Cherry trees. Spectacular views! The white valley of Jerte in Cáceres

For approximately 10 days you can witness the white show of the blooming cherries. In this valley. there are more than one and a half million cherry trees that you can see in its most beautiful phase between more or less 20th of March and 10th of April. The best option is to make a route through all beautiful places with flowers in the valley, bearing in mind that the lower areas flourish first and, later, those in the higher or colder regions. The Orcia Valley is the place you see in photos when you are looking for images of Tuscany. We already know that it’s not a regular city with flowers, but we couldn’t skip this place with breathtaking landscapes. It’s declared a World Heritage Site and begins from the hills of southern Siena and ends at Mount Amiata. This landscape has been already “captured” for many years because drawings of this valley were already painted in the Renaissance. Don’t hesitate to experience it from first hand. The most famous town in this valley is Pienza. 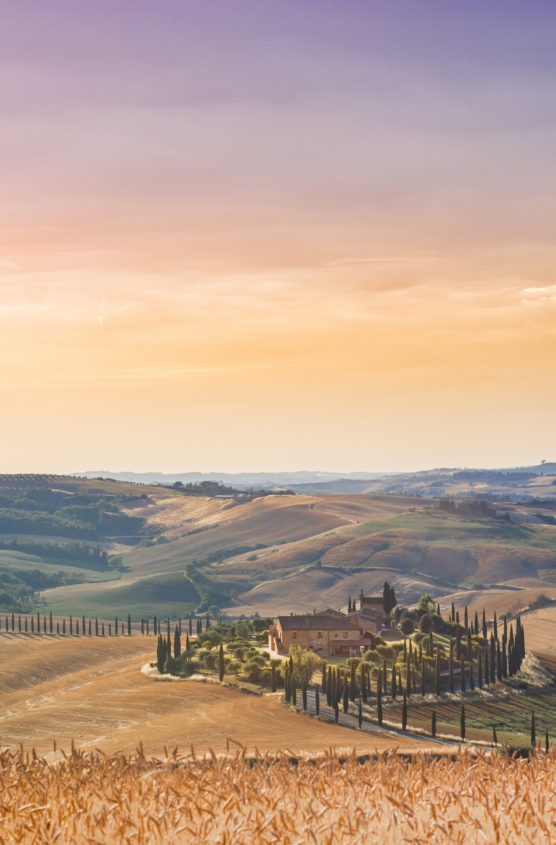 Your vacation in Tuscany can be wonderful

Grasse as the protagonist of Provence, in France

Grasse is a French medieval village in the Provence-Alpes-Cote d’Azur region. It’s known for its production of world famous perfumes. In fact, it appears as the setting for the well-known novel “Perfume”. In May, the roses bloom and, in June, the city and its surroundings cover in purple thanks to the thousands of lavender plants, so typical for Provence. Moreover, the colour isn’t the only striking thing. Also, the fragrance can be noticed from miles. A ‘’perfume’’ that has already enchanted artists like Van Gogh and Cézanne. 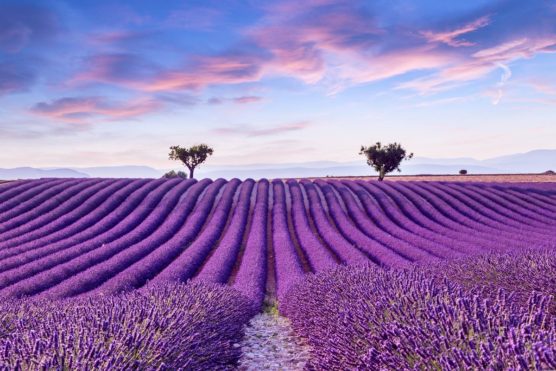 The Keukenhof Park in the Netherlands

The main attention is on the tulips, but there are also orchids, hyacinths, daffodils, carnations, lilies and roses. We are talking about one of these beautiful places with flowers – the Dutch park of Keukenhof and its 32 hectares full of flowers, which open for two months each year. Normally, somewhere between March and May. The visit is worthwhile. In addition, every year the garden is quite different and is directed by a different theme. 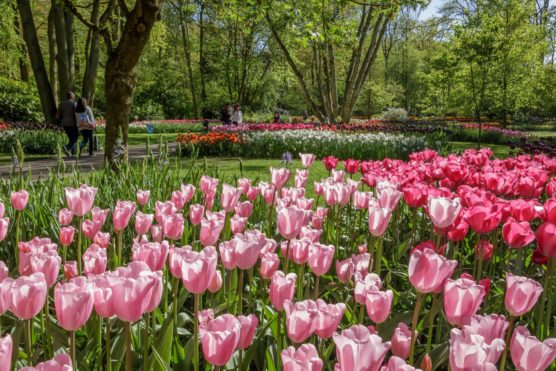 The Story Park of the Quinta de los Molinos, Madrid

This historic park at the end of Calle de Alcalá, is home to huge expanses of pines, eucalyptus, olive trees and almond trees. There are almost 2000 types of flora and when they bloom, between the months of February and March, they create a beautiful print. Outside of those months, the park is also worth the visit. You can walk through two areas: one is more dedicated to the romantic setting with decorative elements, and another, is more focused on agriculture.

Madrid and our design apartments, the best combination

Brussels and its giant carpet of flowers

In the city of Brussels, every two years, more than 500,000 dahlias and begonias are arranged, forming a huge tapestry that covers the floor of the Grand Place which, by the way, is a World Heritage Site, and it’s one of the most beautiful places with flowers in whole Europe. Around 120 volunteers help on the design of the carpet, which is also managed by artists from around the world. The last tapestry was exhibited in 2018 and dedicated to the Mexican region of Guanajuato. 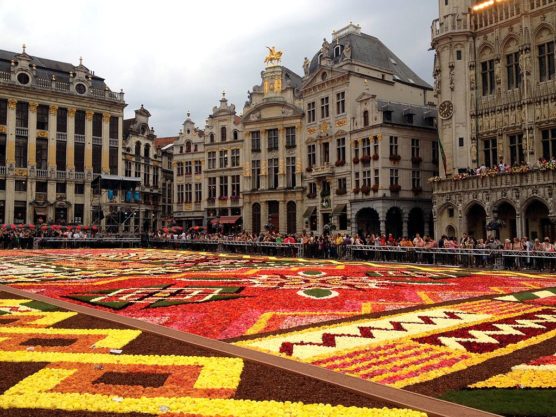 Check out the accommodation in Brussels?

The colorful courtyards of Córdoba

In the first weeks of May, the popular ‘’Patios Festival’’ is held in Cordoba. The city is filled with the scent of geraniums and orange blossom. Strolling through the streets with decorated white houses is definitely a pleasure. There are even organized routes through the neighborhoods of San Basilio, San Lorenzo, San Agustín and the Jewish quarter! 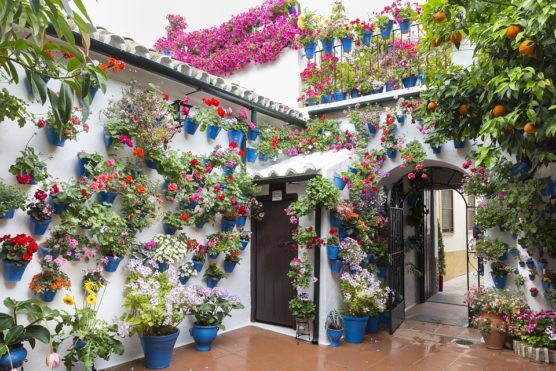 Stay in Cordoba and discover this beautiful city

The Florid Cities and Towns of France

The City / flowery town label is given each year by the National Council of Florid Cities and Towns of France. It is a contest that began in 1959 to promote flowering and green spaces in urban areas. The importance of plants in public spaces, biodiversity, cultivation practices that respect the environment and sustainability are seriously taken into an account.  The labels range from 1 to 4 flowers, and there is a special prize called “Flor de Oro” (the Golden Flower).

In 2018, the municipalities that got the ‘’Flor de Oro’’ were Châtillon-sur-Chalaronne, Gagny, Sarreguemines, Illkirch-Graffenstaden and La Vraie-Croix. This badge is valid for one year, and can’t be granted to the same regions until 6 years have passed.

However, there are many other charming municipalities in France. Here we leave you the 6 magical towns of France.

With a scent of a rose in the Rose Valley, Bulgaria

A bit less known destination but equally mesmerizing as the other beautiful places with flowers – this is the Rose Valley, in Bulgaria. Located south of the Balkan Mountains near the municipality of Kazanlak, this region is a world known producer of rose oil from their blossoms. This is the main ingredient used in the perfumery, pharmacy, and others. The rose Rosa damascene has turned into a symbol of the country and has been cultivated there for centuries. The rose oil is obtained from the distillation process.

❧ Fact: 70% of the world’s rose oil is produced in Bulgaria, making the country the largest producer of rose oil.

If you want to be part of this experience, the Festival of the rose is held each year in June!

This is a bit off-the-beaten-path garden, ideal for those who appreciate an extraordinary architecture. Named the Eighth Wonder of the World by some people, the Eden Project is nestled in a crater in the size of 30 football pitches. In addition, it’s recognized by the British Travel Awards as the Best UK leisure attraction for 5 years in a row. It basically represents two biomes with a large number of plant species collected from different climates all around the world. This attraction in Cornwall, the UK, receives a great tourist interest. The two main domes simulate a rainforest and the other one represents the Mediterranean environment.

Furthermore, there are many events held throughout the year that you can attend with your family.

❧ Fact: The Eden Project was used as a setting in the movie Die Another Day with James Bond.

This is our selection of the most beautiful places with flowers. Did you like it? What other destinations do you think we should include? Actually, any place in the world where nature plays the main role is a place that will be worth the visit.