We always say that traveling doesn’t have to be a big expense. We can discover and enjoy a new destination without being a total bankrupt. Today’s topic is Madrid and how to get to know this city in an economical but fun and interesting way. Therefore, we came up with free things to do in Madrid. You will see that the entrance to some places on certain days is always free and, to others, depends on the occasion. Remember those days, so that, your holiday in the capital is as cheap as possible.

Enjoy much more of the capital with our Madrid Guide

Free things to do in Madrid

This station is designed by Antonio Palacios but was closed since 1966. However, it has been recently restored and opened to the public, although not for its original use. Metro Madrid has launched the Andén 0 project, formed by the old Chamberí station, the Pacific Motor Ship and the old Pacific Station lobby.

The walls, the ceilings, the posters, the complete furniture have been refurbished. The visitors will now be able to see the station almost as authentic as it was in 1919, together with all its color and brightness. There’s no admission fee but doesn’t open every day, so the schedule is as follows: 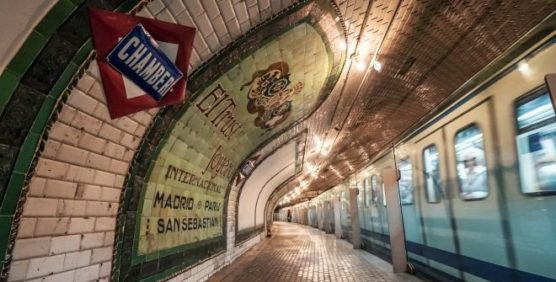 This Egyptian building situated in the Western Park of Madrid holds a memorial to the Amon and Isis Gods. Its age exceeds 2,200 years and was moved stone by stone to Madrid in 1968. It’s a gift from the Egyptian Government in gratitude for the assistance provided by Spain in the conservation of the Aswan Dam.

☛ The temple of Debod is a beautiful place for photographs. From the inside is a museum which can also be visited (as long as it’s not involved in any restoration work). 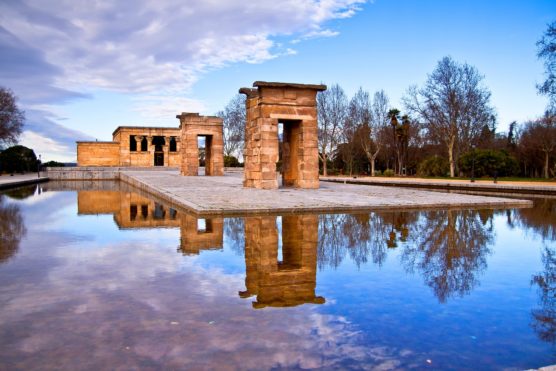 Choose your favorite apartment in Madrid and enjoy your break

El Capricho park is located in the Alameda of Osuna neighborhood. It’s a garden from Romanticism times dating back from the 18th century (it was built in 1780 for the Dukes of Osuna) and it’s very well preserved. It occupies 14 hectares which consist of an artificial river, forest, buildings that look like temples and many more surprising and special places. Although a big part of the park is in an English style, the main architect was Jean Baptiste Mulot, a Frenchman who was Marie Antoinette’s gardener. 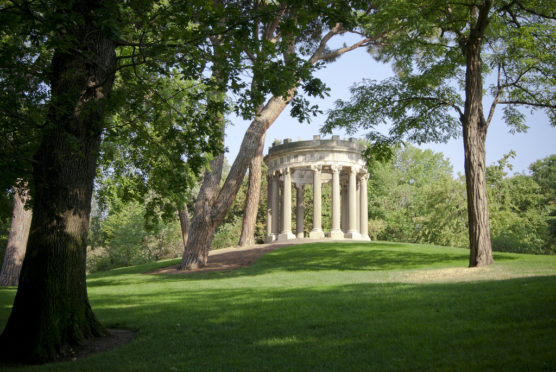 It’s located in a beautiful neoclassical building at the end of the Plaza de Colón, where is the National Archaeological Museum too. The institution of the Royal Library was founded by King Felipe V in 1711. In its headquarters, there is a copy of all the books that have been published in Spain, as well as manuscripts, incunables, maps, illustrations. To be able to consult files, it’s necessary to possess a lector or investigator license.  Part of it has been turned into a Museum of the Library and also Exhibition Halls. There’s no admission fee and if you book in advance there are guided tours on offer. 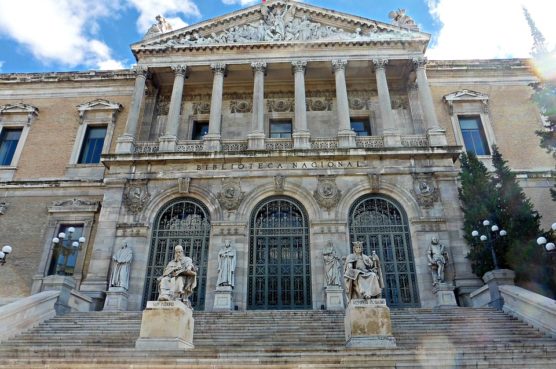 You can find it in the Lavapies neighborhood. This ruined church is nowadays a beautiful library thanks to its restoration in 2004. For years it was a school of the Pious Schools of San Fernando when it got destroyed by the Civil War. Currently, it’s one of the headquarters of the National University of Distance Education in Madrid. If you go inside, you can see the beautiful hanging lamps that illuminate the part of the library, among other things. 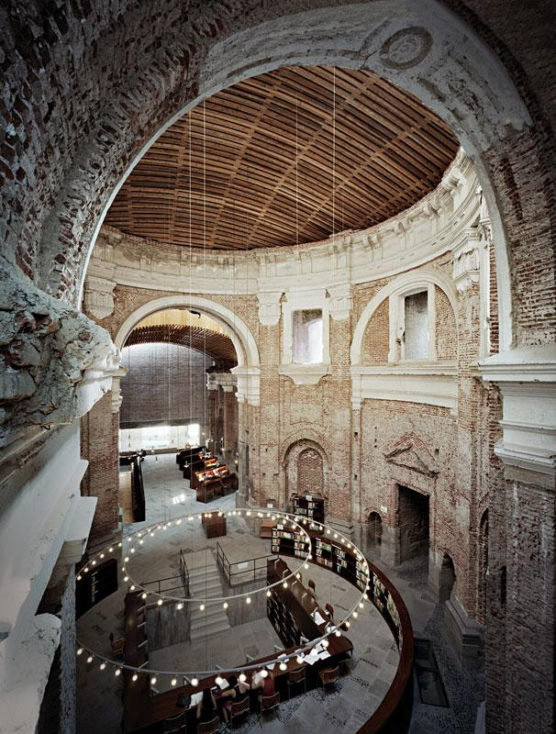 Surrounded by green areas and located in the Retiro Park you will find one of the beautiful venues of the Reina Sofía Museum that usually exhibits sculptures or pieces carried out by the museum. It’s a beautiful glass and wrought iron building that was built in 1887 for the Philippine Islands’ exhibition. The Palacio de Velázquez is another of the venues of the Reina Sofia Museum that is also located in this park. Both buildings have free admission. 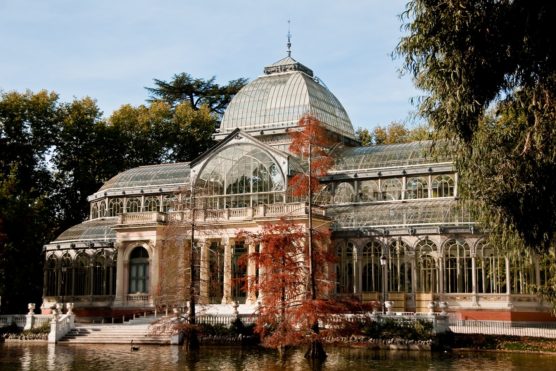 It’s one of the most impressive museums in the world and we know that, generally, you have to pay for the entrance. But it turns out that in certain time slots, it’s free, so why don’t you take the opportunity to visit it? In addition, children under 18, students who are younger than 25 years old and people with disabilities, have gratis entrance.

For the rest of the public, there’s no admission fee from Monday to Saturday from 6:00 pm to 8:00 pm and on Sundays and holidays from 5:00 pm to 7:00 pm. You can check here the price for regular hours. Undoubtedly, the Prado Museum is one of the best things to do in Madrid, consisting of paintings by European masters such as Goya, Rubens or El Greco. 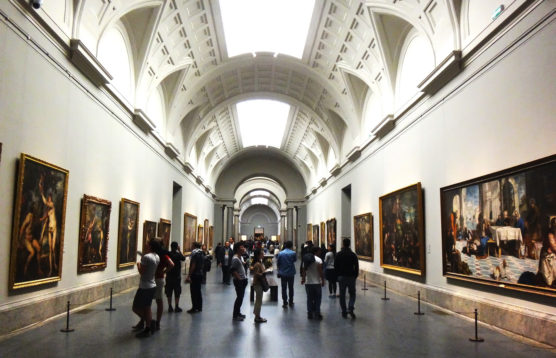 Similar to the Prado Museum, Reina Sofia has also certain time slots where the entrance is free. The time schedule is: from Monday to Saturday (except on Tuesday, when is closed) from 7 pm to 9 pm and on Sundays from 1:30 pm to 7 pm. On the other hand, the 18th (World Heritage Day) and the 29th of April, the 18th of May (International Museum Day), October 12th and December 6th have free admission. People under 18 or over 65 years old, unemployed and large families can enjoy a free day in the museum. Check out the information here about exhibitions, schedules and tickets.

☛ Many more museums in the city have no admission fee on some days of the week, or at certain times. 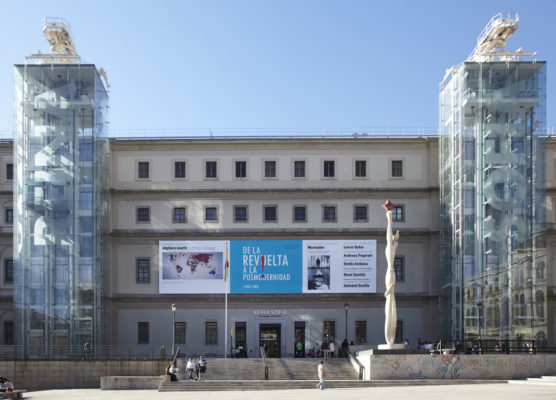 ? The Muslim Wall of Madrid

This Arab wall which is next to the crypt of the Almudena cathedral conserves some stretches which shape the oldest construction of the city. Emir Mohamed I (considered as the founder of Madrid) gave the order to built up the Muslim wall in the 9th century. It was part of a fortress where the urban core of the city developed around it. The chosen site was near the Manzanares River, due to its possibility of cultivation. It was declared a Historic-Artistic Monument in 1954 together with the Tower of Narigües, the Tower of the Bones and the Puerta de la Vega. 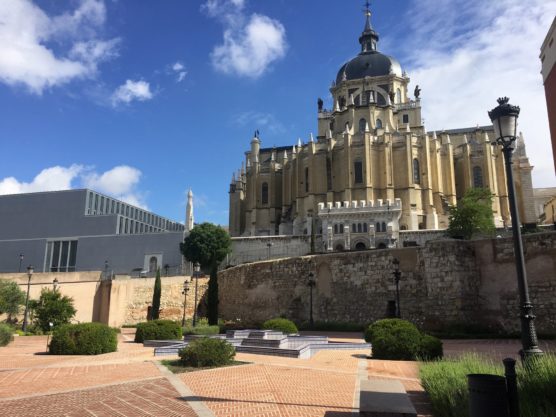 It’s just a 1-hour drive from the capital. If you need to switch off for a moment, this is one of the best free things to do in Madrid. Just prepare a backpack with snacks and water, and put on some comfortable shoes. The National Park of the Sierra de Guadarrama has miles of roads and paths that, back in the past traced the inhabitants of the nearby towns. You can find different geological, botanical and ornithological routes suitable to hike with children.  Discover all the paths to get to know the Park.

☛ Do you like the idea of getting out of the hustle and bustle of the city? Then don’t miss our list of beautiful towns near Madrid for a perfect holiday. For an amazing stay in Madrid, check out also our guide for Madrid.

These were just some of the free things to do in Madrid! Of course, there are many more, such as some public places, which are also beautiful and worth a visit: the Puerta de Alcalá, Retiro Park, Casa de Campo, Puerta del Sol, Plaza Mayor, el Rastro, Atocha station, San Miguel Market etc. Walking around these points will be a beautiful and photographic experience while you are in Madrid.